Last week I went to “Supernova” a “pop culture expo” in Melbourne. It’s basically an excuse for a lot of vendors of sci-fi, fantasy, vampire and zombie – related apparel, games, outfits, and comics to sell stuff to people who turn up in strange costumes. There was even one guy dressed up as Alex from A Clockwork Orange.
But I found a literary genre I didn’t know existed.
Some people have taken the classics of literature and expanded them to include zombies, werewolves and other horror elements.
For example “Sense and Sensibility and Zombies,” by Jane Austin and Seth Grahame Smith, which starts off, “It is a truth universally acknowledged that a Zombie in possession of  brains must be in want of more brains.” Apparently it sold so well he’s written two sequels.
I also saw “Sense and Sensibility and Sea Monsters.”
Did other people know this stuff exists, or have I been living under a rock the last ten years?

The Japanese Tsunami – Why are the Economic and Political Effects not Bigger?

A Note for non-Economists.

This note attempts to explain the possible economic and political effects of the tsunami and nuclear disaster of 11 March 2011 in Japan. It is aimed at non –economists,  those not used to reading economic newsletters, or those interested in the political fallout (if any) the disaster could produce. Part of this note is to explain why the economic effects of the disaster are not as great as one might expect from watching media coverage. This note is NOT intended to down–play the human aspect of the tragedy in which 10,000 people may have died.  The tragedy is real and horrific, but economic forecasts of its effect may seem very small to the non-economists

(i) The immediate economic effect of the tsunami and the nuclear meltdown is that a  large amount of productive capacity (factories, offices, shops and electricity production) has been destroyed.  GDP is the market value of output in a given year, which must equal the income generated by the sale of that output.  It should not be confused with the value of the asset that produced the goods. The asset and the income enter the picture in different ways.

To take a totally hypothetical figure, if a factory worth $3million generated output (say canned fish) of $1milion in a year, there must be $1million of income going to some groups of people in the form of wages to fishermen and factory workers, rents to the factory owner, and dividends or retained company profits.  The effect on GDP  is a loss of $1 million this year, and again next year, and again each year for as long as the factory is not rebuilt.

To repeat, the effect on GDP (national income) in a particular year is not equal to the value of the asset destroyed ($3million), but rather the value of the output (which  equals the incomes) it would have generated in the relevant year: ($1 million).

However, the area hit by the Tsunami, the “Tohoku”  (which means  North-East) region of Honshu accounts for 6-7 per cent of Japan’s GDP and about the same proportion of the population: only half that of the area hit by the Kobe earth quake of 1995. The loss of GDP also includes the incomes not produced by those who have been killed in the disaster: estimated at about 10,000 people. The total population of Japan is about 127 million.

At 17 march, most economists are predicting a loss of GDP of less than half a per cent in the first half of the year.

(iii) We might logically expect that there should be an effect on inflation. Electricity prices could rise, on the other side of the ledger, electricity prices are only a small part of the CPI, and as stated above, the area affected is only a small part of Japan. Finally, instead of allowing power prices to rise, the government or the electricity companies could engage in quantity rationing: distributing the losses around by means of rolling blackouts. This is in effect rather like the quantity rations used in many countries in war-time: hold prices constant but limit how much people can have, so as to hold demand down in line with supply.

(iv) As reconstruction begins, the prices of building materials might rise. This would be concentrated on construction materials that are expensive to transport (cement, stone) since demand will rise strongly but supply will have trouble catching up. Ironically the faster the rebuilding effort is undertaken after a natural disaster, the greater the rise in inflation since the greater the extent to which demand will outstrip supply of difficult-to-transport materials. However the extent of the affected is small in terms of the world economy and the world price of raw materials is what matters here. Materials can be diverted from the 93 per cent of Japan not hit by destruction of buildings. It would also be very “Japanese” in the terms of social harmony for supply companies not to take advantage of the situation by raising price.

(v) We might anticipate that food prices may rise if farming areas have been subject to radiation or were rendered uninhabitable. However the extent of food price rises would be mitigated (or not) by the willingness (or not) to buy imported substitutes.   Japan already imports 60 per cent of its food, and the Tohoku region is only 6-7 per cent of Japan’s economy. Agriculture, forestry, fishing and mining (jointly referred to as “primary industry”) account for only 1.3% of gross national product.  So any inflationary effect on food prices would be small. I have been unable to obtain statistics on the percentage of Japanese agricultural production that takes place in the Tohoku region, but I find no references to it being a major producer or “bread basket” of the country.

(vi) Trust in the Japanese government may deteriorate. In any catastrophe, information comes out in bits and pieces, and the full picture may not be known for some time. (Example: the Deepwater Horizon oil spill of 2010). Governments also tend to want to reassure their populations in times of crisis. This may produce accusations in one or two years of “why didn’t you tell us about X”. The incumbent party may face an electoral backlash if it turns out that information was withheld or was incomplete (even if this was not intentional.) At present the ruling centre-left  “Democratic Party of Japan” (Minshu-to) has 308 of the 480 seats in the Japanese Parliament. The conservative Liberal Democratic Party (Jiyu-Minshu-to) holds 119 seats.  (The word “liberal” should not be confused with its American usage.) Minor parties or independents have 53 seats. For the conservatives to form a government in their own right with a bare majority would require them to gain an extra 123 seats, or to more than double their current representation. This is a “big ask” of any political party.

(vii) Some people will remain unemployed for a considerable time.  Small business owners will face effective (if not legal) bankruptcy. But these people may blame nature, or accept the fact that Japan is prone to natural disasters. The government relief and reconstruction effort would have to be very seriously messed up before people blamed the government.

(vii) The disaster will likely produce a backlash against nuclear power in some areas. Transnational lobby groups will likely intensify efforts to suggest that alternative power sources (solar, wind, tidal) be used rather than a rebuilding of nuclear power plants. Thus there may be opportunities for companies producing those technologies to pitch for contracts.  However, the effect of anti-nuclear lobby groups may be short term. Not many today can remember the Three Mile Island accident (1979) or the Chernobyl accident (1986).  The damage to the nuclear reactor may be forgotten in less time than one might expect. On the other hand, the BBC reports (17 March) that China has suspended approval of any new nuclear power plants.

(viii) Expenditure by the Japanese government on rebuilding and relief will be accompanied by reduced tax revenues from affected areas. In most countries this would mean a rise in the budget deficit and an increase in government debt.  This would normally lead to a downgrading of the government’s credit rating and therefore higher interest rates for the Government borrowings. However, the Japanese government sets aside a contingency fund for natural disasters in its budget each year, and there is currently no talk of a budget blow out.

Conclusion: although the disaster is a human tragedy, the economic consequences are not as great as many non-economists might suspect. [This has been written 17 March, 6 days after the tsunami, on the assumption that there is no nuclear meltdown affecting a greater area of Japan.]

Additional Note: since the above was written on 17 March, there has been much discussion of continuing radiation leaks. The effect of these is difficult to predict. If people in the vicinity of the plant suffer radiation induced illness, GDP is reduced by the loss of their contribution to the economy. However the medical expenses involved in treating them are an addition to GDP. This is not meant to sound ghoulish – it’s just how GDP works. The net effect of the radiation leaks may take years to play itself out.

2nd additional note: since the above was written the Japanese government and TEPCO (the electricity company that owned the plants)  have admitted that at least three of the reactors did suffer meltdowns. What the final damage bill will be, or the cost in human life is anybody’s guess. I’ve never seen such a situation before.

Author’s contact: Richard Snow, Melbourne Australia, snowinmelbourne (at) hotmail (dot) com. The writer has a BEc(Hons)  and MEc degree, worked as an economist in the Victorian State Government Dept of Treasury and Finance for 16 years and taught Economics at University level for 8 years.

After the writers’ conference at San Diego, I went to Arizona. (Most of the east coast of the USA was having really bad weather.) In Phoenix, the Capitol, I went to the few museums they have in the center of town – there aren’t that many. One museum, the Arizona Science Center, had the display “Bodyworks”, by Gunther von Hagens, which consists of preserved plasticized human corpses which are opened up, so you can see all the internal organs. It’s very strange to look at what once were real people. Is it morbid? Yes, sort of, but is it any different to looking at an ancient Egyptian mummy? Maybe not. The Heard Museum has displays of Native American crafts and artifacts

Phoenix is full of cactus plants and red scoria gravel where other cities have grass. I guess they just have to fit in with their climate.

A friend of a friend was good enough to drive me to Sedona, a town built in the middle of canyons that show the layers of rocks very clearly. We also saw “Rawhide,” a reconstructed Wild West town, complete with acted shootouts etc. I’ve included some photos below. I imagine the first settlers found this very inhospitable countryside to visit. It’s a wonder they didn’t pack up and go home. Still, America was founded with that spirit of exploration and setting off into possibly adverse conditions – kind of like the first explorers in Australia who crossed the Great Dividing Range that’s a couple of hundred miles in from the east coast of Australia. When they got to the other side and saw the harsh conditions, it surprising they didn’t go, “Hey I’m out of here.” Wills and Bourke, two of our most famous explorers, died because they miscalculated how far you had to travel before you’d find water. There are parallels. Anyway, some  pictures are below. 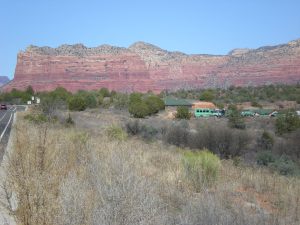