The thing I can’t work out today is “Why aren’t more Americans more visibly angry?”

I have just watched the BBC, CNN’s, MSNBC’s and the Guardian’s coverage of the “Occupy Wall Street” movement. Yes it’s spreading to other cities, but look at the numbers involved: 4,000 in New York, and figures ranging from a few hundred to a couple of thousand elsewhere.

Why am I perplexed?

In the early years of the war on Iraq, after the world knew that the justification for the war had been sexed-up and fabricated, I waited for the protest to begin. The death toll in Afghanistan and Iraq grew steadily. But  no 1960s –style antiwar movement seemed to develop.  I read a book by  one deserter
who fled to Canada, as many did in the 60s to dodge the Vietnam draft. There
may have been others. But I didn’t hear of any mass movement.  I figured that when the death toll in Iraq passed the toll of 9/11 something would trigger a mass revolt against the war. But no. The silence was deafening.

It’s now 4 years since the Wall Street banks’ behaviour pushed the American economy into a crisis from which it is still hurting badly. Houses have been foreclosed on, unemployment is 9 per cent, and Zuccotti Park has what?  4,000 people in it. Commentators on the internet are assuring their audience that the Tea Party people were angry at bailouts when they first began. But I don’t hear their anger at the claim that the richest 400 people in the US have as much wealth as the bottom 150 million.

I’ve had the good luck to live in a country that’s still growing economically, thanks to the  fact that China and India, to which we export, are still growing. And by sheer dumb luck, Australian banks didn’t get involved in the American sub-prime derivates and mortgage bundles.

So why do I care?

The first political saga I ever took an interest in was Watergate. As an 18-19 year old in Australia in 1973-74, I watched in morbid fascination as  the efforts of a President to cover up illegal conduct by his staff brought him undone. My education on abuse of power here in Australia had to wait for the stacking of the Senate against Prime Minister Gough Whitlam in 1974-75.

More of America’s political processes take place in public. They have the primary elections process starting in New Hampshire in February, but effectively already underway 6 months early. You can watch the jockeying taking place in public. Right now, you can watch republicans consider electing a man who believes in magic underwear to the office of President. (And if you don’t know what that means, Google ‘Mormon garmies.’)  In Australia, when Julia Gillard knifed Prime Minister Kevin and the party dumped him as leader, the deal was done in back rooms and became public after it was an established fact.

The US is still 20 per cent or so of the world’s economy. It is the only country that can afford eleven aircraft carrier strike groups. 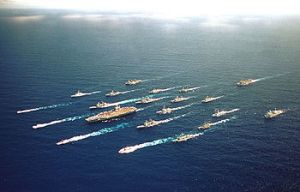 The US still produces a lot of
the ideas and popular culture that influences the rest of the world. And you
can’t escape that America has 312 million people in it, compared to 22.7 back
here. The means the bell curve is 14 times bigger and the tails  of the curve are 14 times thicker, and extend left and right further than here. So when it comes to extreme opinions, well, 22 times as many people means… you guessed it. And as Regan and Thatcher showed, and later Bush and Blair, if an American President can get even one other world leader onside, they can do things that effect millions of people in other countries.  I still regard America as a source of noble aspirations and ideals, even if it’s health-care system and it’s limited unemployment insurance causes one of my female friends to say the thing she dreads most over there is the idea of getting seriously ill. I like the separation of powers that the framers of its constitution came up with.

I’ve been to the US eight times, tacking on trips to Canada, Mexico, Peru, Brazil and Argentina as I went. I’ve been to California, Arizona, Las Vegas, the Grand
Canyon, New Orleans, New York, Washington DC, Philadelphia, and Boston.  I have friends there, some of whose political opinions strike a chord with me. With others, I have learned to shut up. Of my facebook friends in the States, only one is persistently angry in her facebook posts.

So coming back to my first question: why aren’t  more Americans more visibly angry? Is it a sense of futility? Do they believe that they could protest all they like, but it wouldn’t make any difference? Are they too focussed on keeping the job they have, and not making waves? Or is it the belief that they’ll get thru, one way or another. That somehow they will survive. Or that complaining is unseemly when so many others are in the same boat?

Meanwhile, Manhattan has 1.6 million people, and only 4,000 are in Zuccotti Park.

Any readers out there want to make a suggestion?